Are you Ready for Groundhog Day? 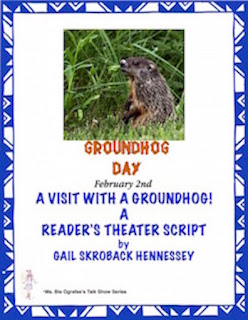 Are you READY for Groundhog Day?

Groundhog Day is February 2nd. It's a time when people look to a groundhog to find out whether or not we will be having six more weeks of winter. The idea dates back hundreds of years when people looked to hibernating animals such as badgers, hedgehogs and bears to see when they might wake up from their winter sleep.

According to the tradition, if the animals saw its shadow, winter would last several more weeks. If it didn't see it's shadow, spring would be soon arriving.

When Europeans, especially the Germans, came to the United States, they brought the tradition. The groundhog became the animals of choice as it hibernated and looked something like the European hedgehog. Groundhog Day started back in the 1880s with the first official celebration on February 2, 1887. The most famous groundhog weather forecaster is Punxsutawney Phil, of Punxsutawney, PA. On February 2nd, Punxsutawney Phil , who lives at the Punxsutawney Library is taken to Gobbler Knob and placed in a heated burrow underneath a simulated tree stump on the stage near where hundreds have gathered. At 7:25 if Punxsutawney Phil comes out to make his weather prediction. If he sees his shadow, there will be six more weeks of winter. If he doesn't see his shadow, spring is on its way!

Did You Know?
3. Did you know that Groundhog Day is an official university holiday at the University of Dallas(Irving, TX)? Celebrations are held in honor of the groundhog.

4. The very first mention of a Groundhog Day in the United States was found in a diary entry of James Morris. The year was 1841.

1.Pretend you are a weather forecasting groundhog. Tell about your big day. What did you hear? What did you see? How did you feel being in the limelight?

2.Learn about the country of Germany: http://www.timeforkids.com/destination/germany

4. The Groundhog isn't the only creature in nature that is used to help forecast weather.Can spiders predict a sunny day? My mother-in-law told me that if you see spiders hanging up their wash(making webs) early on a summer morning, it's a sign of a beautiful summer day. See chimney smoke going straight up on a winter's day? Another sign of nice weather. But, if you see ants building mounds, it's a sign of rain. Same with birds roosting on electrical wires, another sign of coming rain. There are lots of weather folklore. Being observant to nature, can help you predict the day's weather, without a weatherman. Illustrate a weather folklore: http://www.weatherwizkids.com/weather-folklore.htm

Check out my Groundhog Day, Reader's Theater Script: Learn about the groundhog and the history of Groundhog Day with Ms. Bie Ografee's guest, Sarsaparilla, the Groundhog:https://www.teacherspayteachers.com/Product/Groundhog-Day-A-Readers-Theater-ScriptVisit-with-a-Groundhog-2309751

Check out my resources: http://www.pinterest.com/gailhennessey/gails-tpt-store-social-studies-emporiumand-more/

Posted by Gail Hennessey at 6:49 PM No comments: 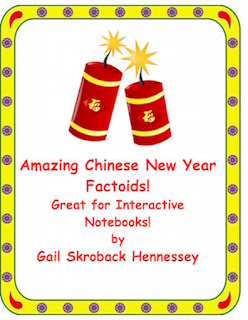 Note: Download the free resource at this link:
https://www.teacherspayteachers.com/Product/Chinese-New-Year-Factoids-FREEBIEInteractive-Notebook-Activity-2214973?aref=j3w7o6ne

Kung Hei Fat Choy!
That’s Happy New Year in Chinese. 2017 is the Year of the Rooster. The rooster is a symbol of confidence. Those born under this Chinese zodiac sign are said to be hardworking, courageous, talented and resourceful. "Rooster" people are friendly and like to talk. They are loyal friends and like to b e active in sports. On the Chinese calendar, called Yan Tan, the new year is 4715.  Chinese New Year is not always held on the same day each year. It depends on when the second new moon of the winter solstice occurs. In 20167 Chinese New Year starts on January 28th.  It is the beginning of a 15 day celebration!

Some of the following are Chinese good luck foods and customs:
Long, uncut noodles are a symbols of long life and friendship.

Giving oranges and tangerines are symbols of wealth and good luck.

Dumplings are eaten as a symbol of a happy family.

People put up lights and decorate windows and doors with red and gold paper. Messages of good fortunes are written.

The Chinese word for fish is similar in sound to the word for plentiful, so fish are important in the Chinese New Year.

Using knives or scissors on New Year's Day are considered bad luck as they may cut your good luck for the new year.

It is also considered bad luck to wash your hair on New Year's Day.

It is considered good luck to hear a bird sign on New Year's Day.

The number 4 sounds like the Chinese word for death, so people try not to use the number on New Year's Day

Fireworks are shot off on New Year's Eve to send away the old year and welcome the new.

Before the new year, it is a custom to clean the home from top to bottom to sweep away any bad luck from the previous year.

It is considered bad luck to own money from the previous year, so people try to pay any bills before the New Year.

It is bad luck to clean on New Year's Day. You might sweep away any good luck!

At exactly midnight on New Year's Eve, all windows and doors are opened to send away the old year and welcome in the new.

If a flower opens on New Year's Day, it is considered good luck.

The Legend of the Chinese Zodiac
Several stories are told about how twelve animals came to be honored with a year in the Chinese calendar.  One is that Buddha was having a party and invited all the animals of the world to come. It was very cold and only twelve animals braved the weather to attend the party. Buddha was so grateful to those that attended his party, that each that came got a year named in their honor. The rat was the first to get to the party, with the ox being second. If you look at the 12 year calendar, which animal arrived last? Man didn't brave the weather to come to the party and is the reason that a year isn't given to man on the calendar.

There are twelve animals in the Chinese calendar and everyone has a year in their honor. The year just ending was the year of the rat. Other animals  include: pig, monkey, snake, dragon, goat, rabbit, dog, tiger, rooster,and horse. 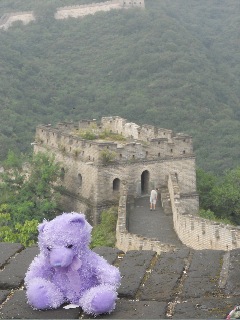 *Purple Annie at the Great Wall of China

• Illustrate/color one of the customs of Chinese New Year.

• Chinese animated folk story: The Three Monks http://www.pitt.edu/~dash/tikki.htmlWrite a summary of the story

You may find these resource of interest. Take a look:

Note: Illustrations from wpclipart.com
Posted by Gail Hennessey at 6:23 AM No comments: 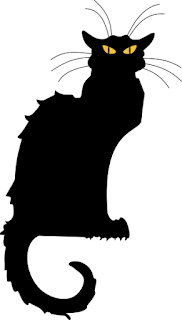 January 13th falls on a FRIDAY.
Friday the 13th!
Some people fear high places, other people fear closed places, and some people fear germs. There are many different things which bring out fear in people. For me, it's snakes! Some people don't like the number 13 thinking it is a very unlucky number. Others specifically fear Friday the 13th. The fear of the number thirteen has a special name. It's called triskaidekaphobia. Fear of Friday the 13th is called paraskavedekatriaphobia.(Yikes-try pronouncing both words!) Did you know that many hotels don't have a 13th floor?(Well, actually there IS a 13th floor but it isn't named 13th). Some airplanes don't have a row named 13 and many hospitals don't have a room 13. There WAS an Apollo 13, a space mission that blasted into space on April 11, 1970.(It was launched at 13:13!) On April 13(not a Friday), there was an explosion. Fortunately, the crew was able to come home safely. In many Spanish-speaking countries, Tuesday the 13th (martes trece)and not Friday the 13th, is considered a day of bad luck.

Do something today to make Friday the 13th an awesome day! Make it a positive day!

Do you pick up a penny for good luck? Another penny superstition is if you find a penny HEADS up, make a wish!

If you have an eyelash on your face, make a wish and blow it away!

Some people like to knock on wood to make sure something bad doesn’t happen after they say something. For example, “I never get a cold.”

A superstition says you must leave a building by the same door you entered or you will have bad luck.

A superstition says that catching a falling leave in the fall brings good health for you throughout the winter months!

On your birthday, do you try and blow out all the candles in one breath? Superstition says if you do, your wish made will come true.

A superstition says that if you see a spider on Halloween, it means a loved one’s spirit is protecting you.

President Franklin D. Roosevelt refused to travel on the 13th of the month. He also would not sit at a table with only 13 people.

Your Turn:
* Illustrate a superstition.
* What is something you can do as an act of kindness for someone else on Friday the 13th?

Posted by Gail Hennessey at 1:46 PM No comments: 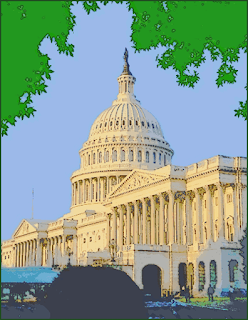 
Did You Know?
1. The First Inauguration Ceremony to be on television was in 1949, for President Harry S. Truman.

2. President Dwight D. Eisenhower was actually lassoed by a cowboy who came up to him on a horse during the 1953 Inaugural parade ceremony.

3. The first President to get out of his limo and walk down the parade route was President Jimmy Carter.

4. Did you know that President George Washington carried a sword to his Inaugural Day ceremonies?

5. The Constitution doesn’t require the president to hold his hand on a Bible but all Presidents have done so except for Theodore Roosevelt and John Quincy Adams.

6. President Gerald Ford was the first UNELECTED President. He assumed the office of President when President Richard Nixon resigned.

7. President Barack Obama had to take the Oath of Office TWICE. Because of a mix-up of the 35 word oath by the Chief Supreme Court Justice, it was done again the next day to make sure everything was legal.

8. The first President to wear long pants to his Inauguration Ceremony was President John Quincy Adams. Prior to this, men worn knee breeches.

10. The first Inauguration to be streamed on the internet was President Bill Clinton.

11. The new President is elected at exactly 12 noon on January 20th.

12. The longest Inauguration speech(8,445 words) was given by President Harrison. It was 100 minutes long and it was a very cold day. President Harrison got pneumonia and died after only about one month in office!

13. The shortest Inauguration Speech was given by President George Washington. It was only 135 words!

14. The first time the Marine Corps Band performed at an Inaugural Day Ceremony was for President James Monroe.

15. President Franklin D. Roosevelt had FOUR inaugural Day Ceremonies. After his presidency, a two term limit was placed into the constitution.

16. During the Inaugural Ball of President Madison, the ballroom was so hot that people broke windows to get some cold air into the room!

20. Lady Bird Johnson was the first First Lady to participate in the Inaugural ceremony. She held the Bible for her husband, Lyndon B. Johnson.(1965) This has now become a tradition. 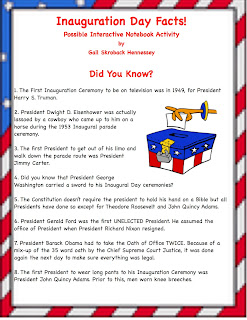 4. Do YOU Know Your Presidents is a series of three challenges. Each challenge worksheet has 25 questions(with 3 choices). The first challenge is the easiest with the third,
the hardest.There is also a Presidential Did You Know? Section: https://www.teacherspayteachers.com/Product/Presidential-Facts-To-Challenge-Your-Students-2586425

Posted by Gail Hennessey at 9:04 AM No comments: 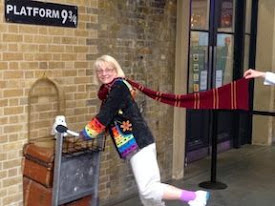 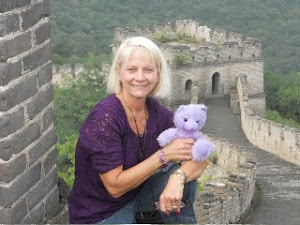 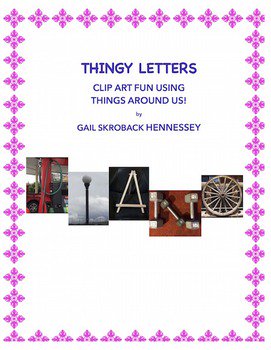 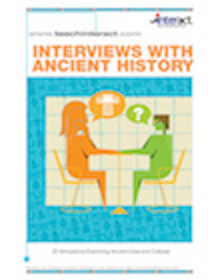